Fulani and Dogon communities from the area (‘circle’) of Koro in Mali signed an intercommunal peace agreement on 28 August 2018 in Sevare, in the region of Mopti, thereby putting an end to more than a year of conflict between both communities.

The peace agreement is the result of a three-month long mediation process led by the Centre for Humanitarian Dialogue (HD) in the area (‘circle’) of Koro located in the region of Mopti. The accord was signed by 34 Dogon and Fulani village leaders from the municipalities of the area affected by the conflict.

Through this agreement, both communities have committed to:

This agreement puts an end to more than a year of intercommunal confrontations linked, in particular, to accessing natural resources in the region. 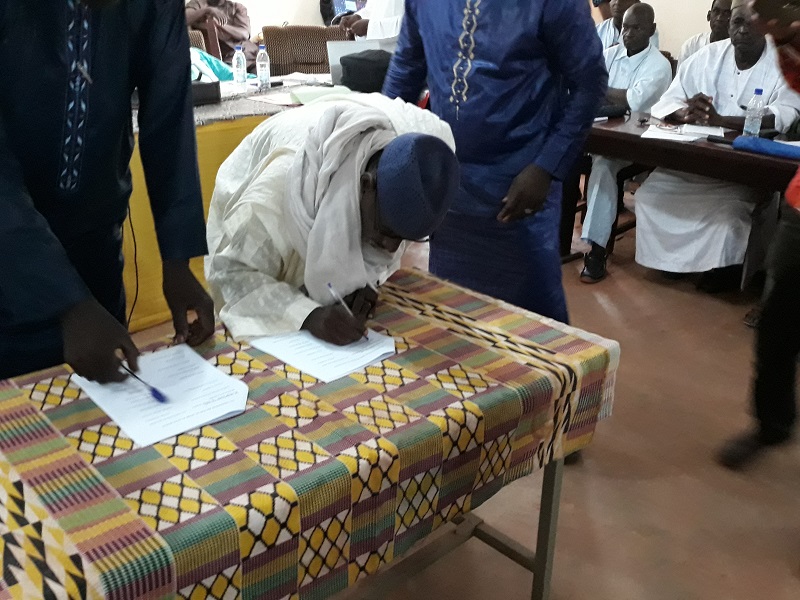 Signing of the peace agreement between Dogon and Fulani communities in Sevare, Mali, on 28 August 2018.

The mediation of the peace agreement was preceded by months of consultations undertaken by HD with all communities affected by the conflict. These consultations aimed to ensure the relevance of the agreement for the communities, as well as their involvement in its future implementation.

HD has also strengthened the scope of the peace process by facilitating a complementary dialogue process with armed groups circulating within the region of Mopti. These groups were consulted at every stage of the peace process, including during the negotiation of the peace agreement itself. Malian authorities were also kept closely informed of HD’s mediation efforts.

“This peace agreement represents an important steps towards reducing the violence which has deeply affected the area of Koro and the two communities over the past year,” said Abdelkader Sidibé, HD’s Head of Mission for the Sahel region. “The next steps, which will in particular include providing the communities with access to basic social services, but also the lifting of embargoes and checkpoints, and the return of internally displaced people, will also be crucial in contributing to a return to stability in the region.”

In the current volatile regional context, HD will also assist the Monitoring Committee of the peace agreement which comprises representatives from both communities, and was set up during the signing of the accord to support its implementation.

Signing of the peace agreement between Dogon and Fulani communities in Sevare, Mali, on 28 August 2018.

The agreement signed on 28 August 2018 falls within HD’s broader mediation efforts (which have been ongoing since 2017) undertaken on behalf of the national authorities of Mali, Burkina Faso and Niger with communities living in the border regions of the three states. These efforts seek to pacify the region.

The organisation would like to express its gratitude to Canada for its support to HD’s activities in the region since 2017.

To read the Peace Agreement (in French), please follow this link.