The leaders of the Dan Nan Ambassagou armed group, representing the Dogon community, have declared a unilateral ceasefire on 2 July 2018 in Mopti, in the context of the conflict which opposes the group to armed actors within the Fulani community in central Mali. This intercommunal conflict, which has been ongoing for more than a year, has fueled the high degree of instability currently affecting the region.

The ceasefire is the result of a five-month long mediation process led by the Centre for humanitarian dialogue (HD) between the political bureau, the military staff and the local representatives of the armed group. This goodwill gesture seeks to mitigate the humanitarian consequences of the conflict and opens up opportunities to negotiate a cessation of hostilities agreement with the armed combatants of the Fulani community.

Through this ceasefire, which was signed in the presence of traditional and elected authorities as well as women and youth representatives from the Dogon community, the armed group has committed to:

As part of this unilateral ceasefire, the Dan Nan Ambassagou armed group has also mandated HD to mediate the conflict between them and the Fulani community armed groups actors in the areas (‘circles’) of Koro, Bankass, Douentza and Bandiagara in central Mali. 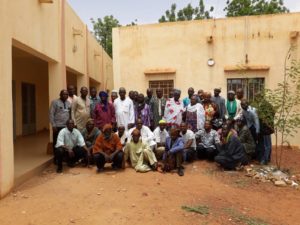 Participants in the meeting on 2 July 2018 where the unilateral ceasefire declaration of the armed group Dan Nan Ambassagou took place.

In the coming weeks, HD will assess the readiness of Fulani community’s armed combatants actors to also declare a ceasefire which could open the door to negotiating a peace ceasefire agreement. HD will additionally continue to engage with state authorities, whom the Fulani and Dogon communities expect that they will ensure their physical safety.

The Dan Nan Ambassagou armed group initially took up arms in 2017 to defend itself against the Fulani community perceived as an accomplice of the attacks led by external armed groups. This then led to a vicious circle of intercommunal reprisals.

This mediation process was facilitated by HD within the framework of the mandate the organisation has received from the Malian Prime Minister, and as part of which HD seeks to peacefully resolve intercommunal conflicts and negotiate agreements between community armed groups and the State to cease armed violence, reintegrate ex-combatants, and deploy State services in the central part of the country.

HD welcomes the Dan Nan Ambassagou armed group’s commitment towards peace and hopes this unilateral ceasefire will represent a first step towards the cessation of hostilities between the two communities, despite the distrust and instability that is currently being fueled by the ongoing clashes between national and international armed forces and jihadist groups.

The organisation would like to express its gratitude to Canada which has supported its activities in the region since 2017.