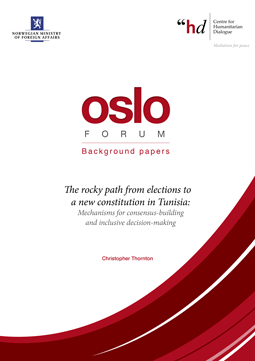 The rocky path from elections to a new constitution in Tunisia

The decision to award the Nobel Peace Prize to the Tunisian National Dialogue Quartet has once more thrust Tunisia into the international spotlight.

This paper, written in early 2014, examines the Tunisian National Dialogue itself, the context in which the process took place, as well as efforts by others which pre-dated the initiative honoured by the Nobel Committee. The paper praises the often innovative Tunisian approaches to consensus-building and inclusive decision-making, including those used by the Quartet, while highlighting seldom heard concerns about the political role played by the national dialogue convenors.

At a time when demonstrations and violent clashes once again highlight the fragility of the transition in Tunisia and other countries following the ‘Arab Spring’, this paper shows that, although it may be turbulent, Tunisia’s transition process so far offers many lessons for other similar contexts.