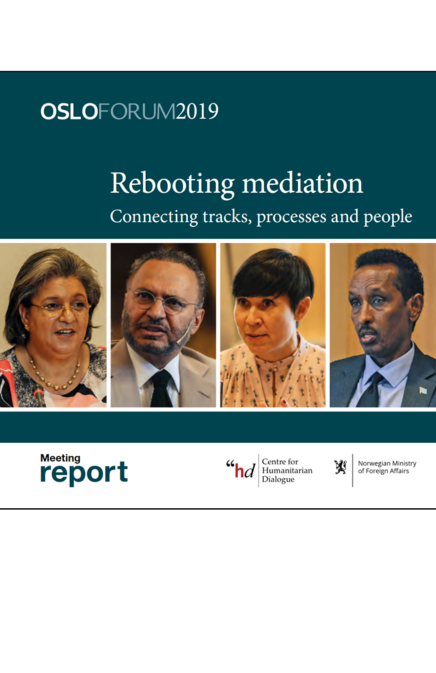 The Centre for Humanitarian Dialogue (HD) is pleased to announce the release of the Meeting Report of the 2019 Oslo Forum: “Rebooting mediation: connecting tracks, processes and people.”

The Report presents the main takeaways as well as valuable insights from the seventeenth edition of the event, attended by more than one hundred of the world’s leading peacemakers, conflict actors, decision-makers and academics, representing 48 different countries.

This year, participants explored how peacemaking practitioners can navigate an increasingly fragmented conflict and mediation landscape in which comprehensive agreements have become scarce. Participants reflected on, among other things, the role mediators can play in reducing tensions in cyberspace, addressing the impact of climate change on conflicts, and how mediators can help prevent political crises from deteriorating further. The retreat’s sessions also explored ongoing developments in Afghanistan, the Korean Peninsula, Syria, Venezuela, Yemen and many other regions affected or threatened by violent conflicts. Throughout the event, participants discussed the importance of the voices of women and young people becoming integral to high-level processes.