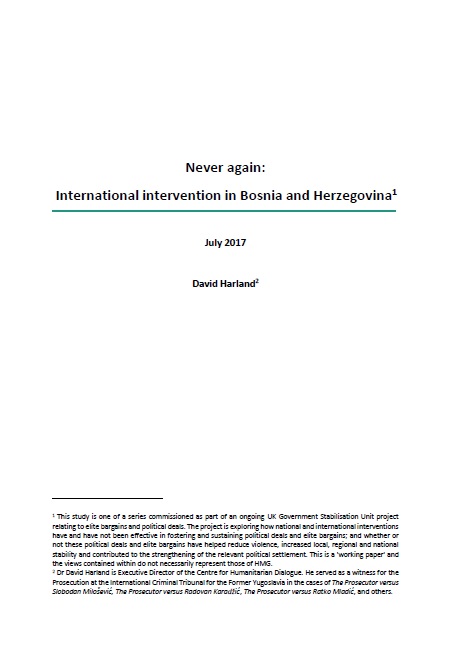 The war in Bosnia and Herzegovina was the most violent of the conflicts which accompanied the break-up of Yugoslavia. This paper authored by David Harland, Executive Director of the Centre for Humanitarian Dialogue (HD), explores international engagement with that war, including the process that led to the signing of the Dayton Peace Agreement. Sarajevo and Srebrenica remain iconic symbols of international failure to prevent and end violent conflict, even in a small country in Europe. They are seen as monuments to the “humiliation” of Europe and the UN and the failure of UNPROFOR, the peacekeeping force on the ground. On the other hand, the 1995 military intervention, the Dayton agreement, and the NATO-led Implementation Force (IFOR) are seen as redemptive examples of the potential of military intervention under American leadership. These perceptions have subsequently shaped Western approaches to military intervention for a generation, and have informed the doctrines of “humanitarian intervention” and the “responsibility to protect”. Yet, this paper argues that these perceptions, based on an inaccurate narrative of the conflict, are wrong, and therefore the basis on which other interventions have subsequently taken place – including in post-war Bosnia and Iraq, Libya and elsewhere – are fundamentally flawed.