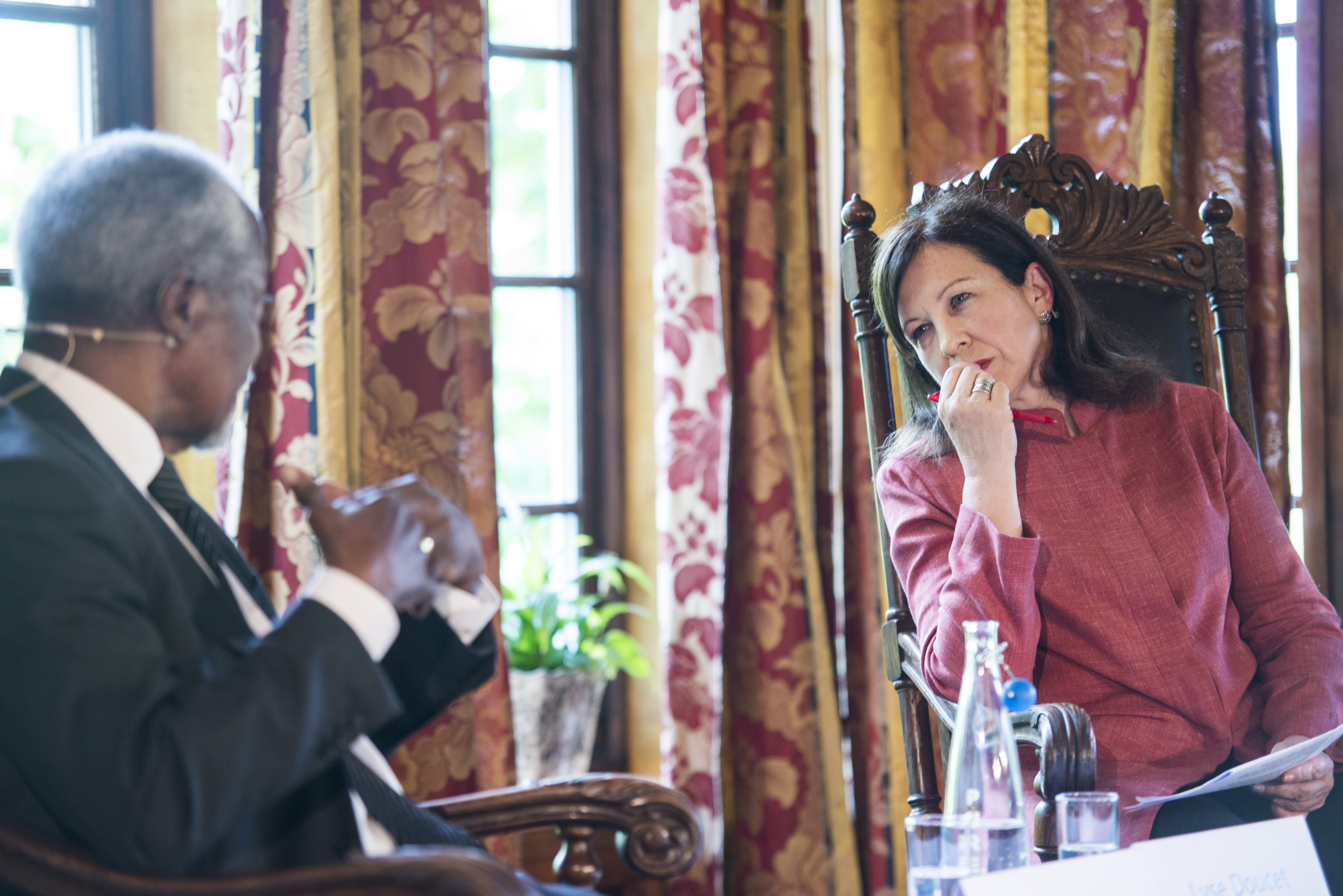 What happens behind closed doors when peace agreements are negotiated? What went on in the secret talks that ended the half-century war in Colombia? What got mediators through the final hurdle of peace talks in Kenya? The Mediator’s Studio gives you a glimpse into the normally hidden world of peace diplomacy. Host Adam Cooper brings you first-hand stories from mediators, armed groups and governments on what it takes to end wars. The Mediator’s Studio is an Oslo Forum podcast, brought to you by the Norwegian Ministry of Foreign Affairs and the Centre for Humanitarian Dialogue.

7. Meredith Preston McGhie on how to become a mediator

Secretary General of the Global Centre for Pluralism, Meredith Preston McGhie, reveals the backroom story of working closely with Kofi Annan to resolve Kenya’s violent political crisis in 2008, typing out the peace deal as each word was negotiated, with senior ministers circling her to glimpse the draft on her laptop. She lays bare the mediator’s craft while describing her work to resolve conflicts in Asia and Africa, admitting that while heavily pregnant she once threatened to go into labour when negotiations began to stall.

Listen to the seventh episode here:
.

Special Adviser to the African Centre for the Constructive Resolution of Disputes, Ambassador Said Djinnit, recalls the nightmares of a childhood under colonial rule in his native Algeria. With a chilling story of the moment a French soldier threatened to kill his father, he illustrates how those injustices propelled him into a lifetime of mediation. Among the many tales of the untold, he recounts being mistaken for a French agent during his mission to restore democracy in Comoros following a dramatic coup, as well as persuading a military general in Guinea to step down shortly after seizing power.

Listen to the sixth episode here:
.

5. Betty Bigombe on making peace with the Lord’s Resistance Army

Special Envoy of Uganda to South Sudan, Betty Bigombe, retraces her steps to northern Uganda as government negotiator, engaging one of the most brutal armed groups the world has known in her efforts to end the civil war. Despite significant threats to her safety, including ambushes, landmines and accusations of treason, she persists in her attempt to forge peace. Drawing on decades in peacemaking, she outlines the principles that guided her recent engagement in South Sudan and is forthright in her views on the tension between justice and peace. Listeners are warned that this episode contains graphic descriptions of violence.

Listen to the fifth episode here:
.

Norwegian peace facilitator, Dag Nylander, recounts how he smuggled salmon into Havana where negotiations brought to an end one of South America’s longest running civil wars. He describes how, during an early morning helicopter mission, a chance encounter with a young guerrilla influenced the peace agenda in Colombia. And he outlines the essence of Norwegian-style diplomacy, laying out how the dynamics of peace processes change over time, making the impossible achievable.

Listen to the fourth episode here:
.

The founder and CEO of the International Civil Society Action Network, Sanam Naraghi Anderlini MBE, calls for a complete rethink of international approaches to conflict resolution to better reflect the increasing fragmentation of warfare. Sharing first-hand accounts of her encounters with Gucci gangsters in Jamaica and South Africa’s Knitting Needles Guerrilla, and recounting a dash after a foreign minister through the corridors of the UN, she demonstrates the importance of diversifying voices at the negotiating table and how the pivotal UNSC Resolution 1325 established a new discourse for the inclusion of women in peacemaking.

Listen to the third episode here:
.

2. Ghassan Salamé on the failures of the international community to stop wars

Former United Nations Special Envoy to Libya, Ghassan Salamé, reveals why he’s “very angry” and concerned about the “state of multi-lateralism and international cooperation” today. Drawing on his personal experience dealing with a highly internationalized conflict, Salamé opens up about his frustrations with members of the UN Security Council for “stabbing him in the back” and concern for their “hypocrisy” in undermining his mediation efforts in Libya. He recounts the harrowing aftermath of the terror attack on the UN mission in Baghdad in 2003, and he laments the slowness of his native Lebanon to deal with its divided past.

Listen to the second episode here:
.

1. Lyse Doucet on the great mediators of our time

The BBC’s chief international correspondent, Lyse Doucet, reflects on the most pivotal moments of mediation in recent history – from Syria, to Afghanistan and Yemen. Through recollections of her personal encounters with renowned mediators like Kofi Annan, Martti Ahtisaari, Catherine Ashton and Lakhdar Brahimi, among others, Lyse offers a unique view of mediation, sharing insights from her work behind-the-scenes.

Listen to the first episode here:
.

What happens behind closed doors when peace agreements are negotiated? The Mediator’s Studio gives you a glimpse into the normally hidden world of peace diplomacy: first-hand stories from mediators, armed groups and governments on what it takes to end wars.

Join our host Adam Cooper, in a conversation with Norwegian Minister of Foreign Affairs, Ine Eriksen Søreide, to get a sneak peek of the show.

Listen to the introduction here:
. 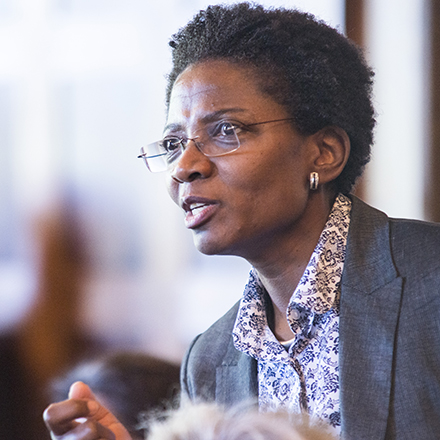 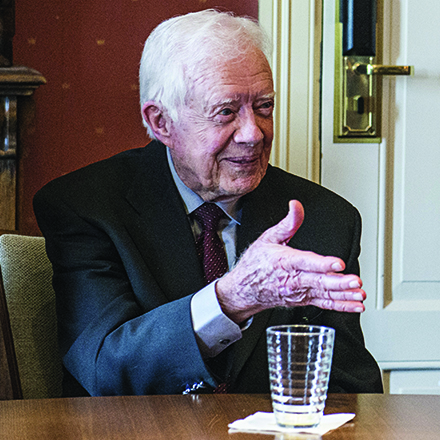 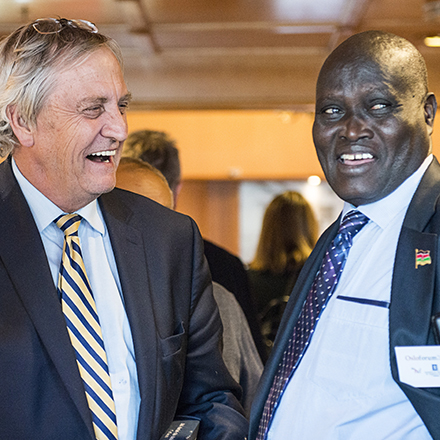 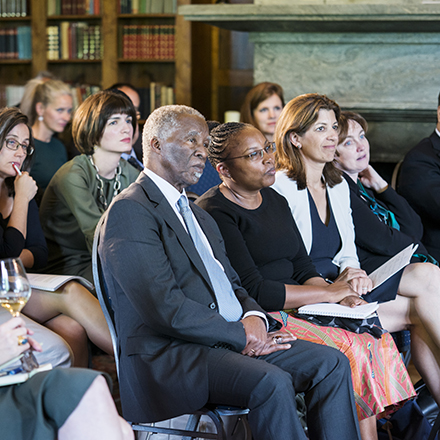