The project initially focused on the city of Ambon in Maluku, where religion-related communal conflict cost the lives of more than 2’000 people between 1999 and 2002 and injured at least 4’000 others. Lingering suspicion and segregation between Muslims and Christians still poses a threat to security today.

HD and THC seek to bring formal and informal interfaith actors and institutions together in a series of dialogues to discuss feasible options to effectively address post-conflict problems of segregation and the issue of continuing distrust between the different religious communities in the region.

Trainings and workshops were organised to help build the capacity of interfaith actors and institutions and provide them with the critical skillset needed for local intervention, dialogue and mediation. The project began in January 2015 ran until December 2016.

The province of Maluku lies on the eastern Moluccas archipelago of Indonesia. As opposed to most of Indonesia which is predominantly Muslim, Maluku has a population that is almost equally split between Muslims and Christians.

Between 1999 and 2002, the province was torn by a vicious religion-related communal conflict which found its source in the political struggle between the Muslim and Christian communities. The conflict cost more than 2’000 lives and displaced thousands of people.

It formally ended in February 2002 following the signing of the Malino II Peace Agreement. Since then however, underlying tensions and periodic violence have persisted between the communities. The province of Maluku and the city of Ambon in particular have been affected by many violent religious-based incidents. Segregation due to the lack of social interaction between communities leading to the prevalence of stigma and negative prejudice has been the main driver of violence between religious communities.

The latest major occurrence of violence was testament to these underlying tensions and the fragility of peace between the two communities. In September 2011, a traffic accident involving the death of a Muslim motorcycle taxi driver in a Christian territory sparked inter-religious violence that resulted in the death of 8 people, 150 houses burnt, and 4,000 newly displaced people. The outbreak of violence exposed the lasting impact of the earlier conflict, the depth of the tensions between the communities and the inability of the police to control the situation.

Another aggravating factor is the lack of communication between different community leaders, including those in the Interfaith Communication Forum (FKUB – The Government’s forum for Religious Harmony). Seats in the proportionately designed FKUB have become tokens for elites in each religious group. Those involved in attempts at mitigating conflicts often come from outside the formal institutions. Preliminary research has found that formal interfaith institutions in Maluku need capacity building to improve their work whilst informal and private interfaith institutions need support for their united movements.

HD and THC brought local stakeholders and interfaith actors from both sides of the divide together in a neutral setting for them to discuss the communities’ issues. This allowed them to identify steps that will contribute to sustainable peace and prevent future violence, as well as encourage reconciliation in the long term.

In addition, HD and THC is  undertaking trainings and workshops to build the capacity of interfaith actors and selected local stakeholders in Ambon to mediate local communal conflicts and help prevent, mitigate and resolve these conflicts.

The two-year project was divided in three phases: an initial research phase which sought to better understand the drivers of religious-based violence and conflict in Ambon, and the roles of interfaith actors and religious leaders in peacebuilding and conflict prevention. It included focus group discussions and individual interviews with academics and experts in Ambon and Jakarta, local stakeholders, members of civil society, religious leaders and local interfaith institutions. Fieldwork was also undertaken to complement the analysis of existing data on the conflicts between the religious communities. The research findings was compiled into a working paper and shared with the participants to the dialogue process and other relevant stakeholders.

As part of a second phase, HD, THC and the Ambon-based Institut Tifa Damai Maluku (ITDM) facilitated a series of dialogue sessions with selected religious leaders, interfaith institutions and civil society actors in Ambon. The series allowed FKUB representatives participating in the dialogue to connect with informal interfaith institutions and other non-governmental actors. It also promoted greater understanding of each other’s roles and encouraged collaboration and co-operation that will lead to more effective action to build peace, as well as prevent and mitigate future conflicts. 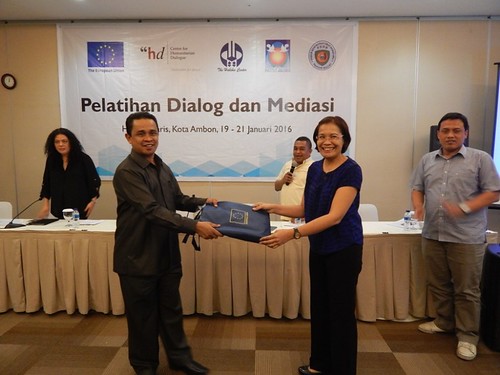 As part of the third phase, HD and THC organised capacity-building workshops on dialogue, mediation and peacemaking. These workshops were tailored to the local context and targeted at relevant interfaith actors or institutions. They included trainings on practical skills such as mediation approaches and what works for different contexts; exploring confidence building measures; and communication skills in a conflict setting. A first capacity building workshop sought to allow community and religious leaders (members of the interfaith network and the FKUB) to share experiences on conducting mediation initiatives in Ambon and strengthening their mediation skills. A second workshop focused on building the capacities of community leaders from the four target areas (Batu Gantung, Waringing, Poka and Rumah Tiga), while a third workshop focused on providing FKUB members with opportunity to strengthen the institution’s capacity to function effectively. The workshop successfully concluded with the FKUB – both provincial and city level – producing a detailed work plan for 2017.

A fourth capacity-building workshop was organised in September 2016 during which mediation principles and skills were again discussed. The workshop brought together 26 participants including FKUB members, representatives of the Batu Gantung, Waringin, Poka and Rumah Tiga communities, and members of the local peace network. It focused on improving the participants’ understanding of mediation processes and tools. It also sought to provide participants with opportunities to share their experiences. A draft mediation toolkit, put together by HD to support the mediation of local communal conflicts, was also presented and reviewed by participants on this occasion.