HD has been discreetly and informally active in Tunisia since 2011, interacting with stakeholders to foster mutual understanding and consensus around the democratic transition process. In particular, HD has been supporting inclusive dialogue between political parties to ensure tensions and violence did not derail the delicate transition process.

Tunisia is considered by many to be the most promising example of democratic transformation among the so-called ‘Arab Spring’ countries. However, as the protests in early 2018 have shown, serious threats remain and the success of this process is by no means assured. Following peaceful protests in late 2010 and early 2011, the regime of Zine El-Abdine Ben Ali ended in January 2011. Since then, Tunisia has experienced a period of intense democratic transformation managing its way through turbulent and difficult times.

HD’s efforts culminated in July 2014 with the signing by 19 of the main Tunisian political parties of the Charter of Honour on the fair conduct of elections in the country. The Charter was elaborated and adopted by Tunisia’s main political parties in a process facilitated by HD, which lasted almost eight months. The Charter was pivotal to ensuring that both the parliamentary elections held in October 2014 and the presidential elections held in November-December 2014 took place in good conditions and that the competitive atmosphere which is part of all electoral campaigns did not jeopardise the electoral process itself. Since the elections, HD has remained engaged in Tunisia working to help institutional and political actors to manage and respond to the challenges their country faces using the tools of dialogue and mediation. 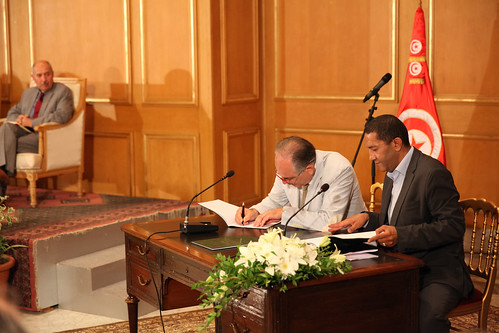 Signing of the Charter of Honour, Tunisia, July 2014. © Centre for Humanitarian Dialogue[/caption]

Following peaceful protests in late 2010 and early 2011, the regime of Zine El-Abdine Ben Ali ended in January 2011. This marked the end of over five decades of authoritarian rule in Tunisia.

In October 2011, the country’s first democratic elections took place. This resulted in the establishment of a coalition government, known as the Troika, made up of the Tunisian Islamic political party, Ennahda, the socialist party, Ettakatol, as well as a centre-left party, the Congress for the Republic.

However, through its national dialogue process, led by key Tunisian civil society organisations, the country was able to navigate its way through this difficult period.  On 26 January 2014, Tunisia’s National Constituent Assembly adopted a new constitution and began preparations for elections. The Tunisian legislative elections took place on 26 October with a relatively high degree of transparency, security and fairness. Despite a heated campaign, the first round of the Tunisian Presidential elections then took place on 23 November without violence. These were Tunisia’s first genuine and competitive Presidential elections, with 27 candidates running.  A second round of voting took place on 22 December, and Tunisians chose Beji Caid Essebsi, as their first democratically-elected President.

The 2014 elections saw the secular Nida Tounes party win the largest number of seats in parliament and its leader, Beji Caid Essebsi, the Presidency. Despite this success, Nida Tounes and its allies did not have a sufficient majority to form a Government and decided to enter into a coalition with their arch-rivals, Ennahda, in early 2015.

Tunisia continues to face many challenges. The economic and social ills which many believe had precipitated the 2011 protests have not been addressed. Moreover, Tunisia faces major security challenges, which have been compounded by instability in neighbouring Libya. In 2015, Tunisia witnessed several serious terrorist attacks targeting foreigners at the Bardo Museum in Tunis on 18 March and at a beach resort in Sousse on 26 June. The organisation known as Islamic State has claimed responsibility for these attacks, as well as for an attack on the border town of Ben Guardene on 8 March 2016 that ended with 55 people dead. A new national unity government was formed in August 2016 but municipal elections were postponed and the Tunisian public has a low level of trust in the political class.

HD has been active in Tunisia since 2011. Its primary role has been to facilitate, discreetly and informally, dialogue between the political actors involved in the democratic transition process in order to foster mutual understanding and consensus, and mitigate tensions, risks and potential violence.

Throughout 2013, HD liaised with, and shuttled between key political figures to share their positions and outline solutions to political and security crises. In so doing, it was able to play a role in the realization of important steps in the democratic process.

In the first half of 2014, HD supported an informal dialogue process between key Tunisian political parties, which led to the development of the Charter of Honour for Tunisian Elections, and Referenda. The Charter was pivotal to ensuring that the elections took place in good conditions and that the normal competition witnessed in all electoral campaigns did not risk jeopardising the electoral process itself.

The Tunisian Charter of Honour:

The Charter was formally signed on 22 July 2014 and almost 30 political parties adopted it before the 2014 elections. Following the signing, HD actively supported the promotion of the Charter of Honour and its obligations, including through a targeted publicity campaign to raise its awareness in the Tunisian media.

In 2015 and 2016, HD held substantive consultations with Tunisian political and institutional actors on the challenges faced by the country, particularly on the security front, and on the situation in neighbouring Libya and its impact on Tunisia. HD continues to support the Tunisian democratic transition through dialogue and mediation.