Since 2009, HD has been a member of the International Contact Group (ICG) which helped shepherd the parties towards these landmark agreements that aim to end decades of conflict that has cost more than 100,000 lives. The two milestone accords, which were facilitated by Malaysia, serve as a road map to political and structural reforms in Muslim Mindanao, such as the creation of a new autonomous political entity which will be known as the Bangsamoro Autonomous Region.

After the signing of the CAB, next steps included the framing of a Bangsamoro Basic Law (BBL), which has been submitted to the Philippine Congress. Once approved, it will be submitted to a plebiscite, following which an implementation architecture will be set up and a Bangsamoro Transition Authority established. All of these measures will be undertaken to help ensure a smooth transition towards the creation of the new Bangsamoro autonomous political entity.

HD began providing advice to the Malaysian facilitator, the MILF and the Government on the peace process in 2007. Following the collapse of the agreement on Ancestral Domain in 2008, HD helped put together the International Contact Group (ICG), which was officially launched in November 2009 to advise and assist the two parties and the Malaysian Facilitator in the talks. HD has sent representatives to every round of talks since December 2009 and has regularly held bilateral talks with each party’s representatives. In addition to HD, the ICG is composed of the Governments of Japan, the Kingdom of Saudi Arabia, Turkey and the United Kingdom as well as international non-governmental organisations: Conciliation Resources, Muhammadiyah and the Community of Sant’Egidio (an original member, the Asia Foundation later joined the Third Party Monitoring Team in 2013).

Following this, the parties have worked on, and submitted, a draft of the Bangsamoro Basic Law, to be adopted by the Philippine Congress. However, a security incident in January 2015 involving government Special Forces, as well as MILF and other Moro fighters in Maguindanao, resulted in more than 60 casualties. This threatened and eventually derailed the passage of the bill under the Aquino Administration. Since the security incident, HD has been closely supporting both sides to help ensure that further violence does not break out, and that both sides remains committed to the peace process during this transition from the negotiation phase to the implementation phase.

The Bangsamoro Transition Commission (BTC) was created in December 2012 and mandated by the President to draft the Bangsamoro Basic Law (BBL). As an ICG member, HD started providing assistance to the BTC shortly after its creation.

Initial support came in the form of access to international and national legal and autonomy experts. HD’s relationship with the BTC was then further strengthened with the signing of a Memorandum of Agreement (MOA) in December 2013. In addition to access to experts, HD has also been providing technical support to BTC’s Communications Group and its weekly radio programme (“BTC on the Air”) airing in Cotabato, Sulu, and Basilan. Furthermore, HD facilitated various dialogues between BTC and stakeholders in the peace process, such as indigenous peoples (IP), Christian communities as well as communities in MNLF areas. It also provided assistance in the publication of two BTC primers: one on the mandate of the BTC, and a second on FAQs on the proposed Bangsamoro Basic Law.

In February 2017, a new BTC was inaugurated by the Duterte administration. The membership was expanded from 15 to 21 members in order to make the peace process more inclusive and representative of the various stakeholders in the Bangsamoro. HD will continue to provide support and assistance to the BTC, especially as deliberations are still ongoing regarding the draft bill that the Commission submitted to Congress in July 2017.

Supporting local peacebuilding initiatives in Sulu, south of the Philippines

HD first became involved in the province of Sulu after a serious outbreak of fighting between the Moro National Liberation Front (MNLF) and the Philippines Armed Forces in February 2005. HD facilitated a series of talks between representatives of the MNLF Chairman, Nur Misuari, and the Government, represented by the then Secretary Teresita ‘Ging’ Deles. The parties met for five rounds of talks and agreed to resolve the detention of Nur Misuari. Under HD’s guidance, a GPH-MNLF Peace Working Group (PWG) was set up in Sulu to address security issues in the region.

The Peace Working Group was a bold experiment in local third party mediation in an active conflict zone. It worked initially, but with the lack of political progress in implementing the 1996 agreement, continuing violence perpetrated by lawless groups such as Abu Sayyaf, and explosive clan conflicts, the two armed forces continued to be drawn into conflict.

It soon became evident that the violence and dislocation was occurring for much more complex factors relating to clan conflicts within indigenous Tausug (ethnic group in Sulu) society. These conflicts were in turn exploited or exacerbated by local politics and the underlying Bangsamoro struggle. Following a particularly violent period in 2007, when MNLF camps in Sulu were overrun by government forces, HD decided to reformulate the concept and operation of the peace working group to focus more on localised drivers of conflict. Instead of just working with representatives from the MNLF and the Government of the Philippines, the Peace Working Group started to work through credible and respected individuals from the conflict-affected communities, who had already been playing a role as local mediators.

The Peace Working Group was therefore transformed into a more locally-anchored body, the Tumikang Sama Sama – which means “Together we move forward” in Sinug, the language spoken by Tausugs.

The group is composed of a small body of well-respected local individuals including from the security sector and the Office of the Mufti, and is assisted by a secretariat drawn from the local community. Based on experiences from specific conflicts, the TSS derived an approach to conflict resolution that combines the influence of local tradition with international third party presence.

The TSS has mobilized a locally-driven conflict resolution process where people come together to speak about conflict issues that affect them, and choose leaders who can mediate clan conflicts and engage in back-and-forth shuttling between parties in conflict. HD provides training in conflict resolution, financial support and shadowing of the mediators. The TSS has been asked to provide their mediation services to more than 120 clan conflicts so far, helping to settle over 80 of them. As a way forward and to further embed the TSS’ approach in Sulu, HD helped facilitate the registration of the TSS as a non-government organisation, with the local facilitators themselves serving as officers. Since 2015, the TSS has functioned as a legitimate NGO, working independently from HD. 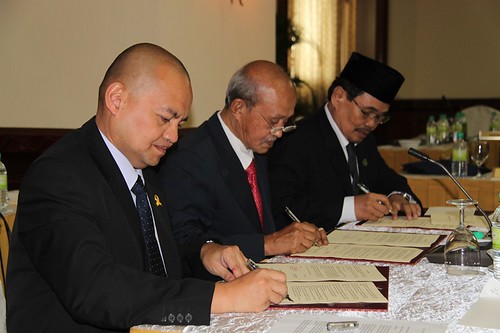 From April to December 2016, HD and TSS worked closely together to prevent and reduce the risks of election-related violence and conflict on the island of Sulu in Mindanao around the May 2016 national elections and the October 2016 local elections (which were postponed and will take place prior to October 2017).

TSS and HD did this by mediating and facilitating dialogue between and among key stakeholders, including election candidates, local government officials, Philippine National Police, Armed Forces of the Philippines, non-state armed actors, and civil society organisations, to prevent election-related violence. They also trained youth volunteers in mapping, monitoring, tracking and reporting on conflicts or potential conflicts in key municipalities of Sulu. In addition, they promoted peaceful elections by coming up with peace accords/declarations and increasing public awareness of these accords and declarations. These various activities, supported by the Government of Australia, are part of the ‘One Network for Elections (ONE)-Sulu Initiative’ which was initiated in 2013. The ONE-Sulu network is comprised of government, religious and civil society organisations, and is complemented by youth volunteers and community leaders trained by the TSS in mediation as well as in monitoring and reporting. The project also assisted local officials by establishing hotlines through which people could report election-related violence.

Inclusion in the Bangsamoro: Working with Women and Youth

In 2017, HD provided the opportunity for women from various MNLF communities across Mindanao to meet with each other and share their unique concerns and perspectives regarding the peace process. After several rounds of these discussions, they decided to revive the National Bangsamoro Women’s Committee (NBWC), which had been dormant for several years. The NBWC aims to increase participation by women in the Bangsamoro peace process.