Between 2009 and 2011, HD followed events in Liberia closely amid concerns over underlying political tensions in the country. As part of its efforts to prevent conflict wherever possible, HD identified the Presidential elections planned for October 2011 as a possible flashpoint.

The organisation was able to respond rapidly as the electoral process unfolded and its high-level contacts in the country enabled the organisation to promote dialogue between political groups at a critical moment. After the national elections, it was generally agreed in Liberia, as well as by the international community, that there was need for a long term dialogue and reconciliation process to deal with the many problems and disputes that surfaced both before, and during, the elections. As HD had developed a good understanding of the Liberian context, it was well placed to contribute to the development of a national dialogue process in the country.

HD finalized its work in Liberia in 2012 following many efforts to assist in the development of Liberia’s reconciliation and national dialogue. To achieve this, HD ascertained and helped articulate what was needed in the dialogue and reconciliation process. HD met and held consultations with representatives from the principle agencies in the Government Task Force set up to develop the process as well as United Nation’s Mission in Liberia (UNMIL) and the international community. HD also participated in, and provided technical input to, a three-day intensive Roadmap design workshop facilitated by the United Nations Development Programme’s Bureau of Crisis and Recovery for representatives from the principle agencies and civil society organisations involved in the Government-commissioned Task Force. A first draft of the Strategic Roadmap for National Reconciliation was produced from these discussions for further consideration and refinement by the leadership of the principle agencies involved.

HD’s work in Liberia was initially focused around the publication of the Final Report of the Liberian Truth and Reconciliation Commission (TRC) in July 2009. The TRC report had become a dividing factor within the Liberian society, and politicians were using the report to advance their own political agendas in the lead-up to the 2011 elections. HD’s goal was to find a formula for its implementation in light of the upcoming general elections in 2011.

There was widespread concern about the potential escalation of political tensions in Liberia in the run-up to the elections. The United Nations Mission in Liberia (UNMIL) and the then Special Representative to the Secretary-General, Ellen Margrethe Løj, wanted to ensure the political parties carried out their campaigns in a peaceful way in order to lay the foundations for free and fair elections. These efforts appeared to have been successful when the first round of voting took place in a calm manner. However, after the voting, the incumbent President and the leader of the Congress for Democratic Change (CDC) faced the prospect of a second run-off election to decide the Presidency. The CDC disputed the fairness of the first round of voting and, the day before the run-off election was due to take place, the CDC held a rally and urged supporters to boycott the second round of voting. This rally ended violently, many people were taken into custody and a number of media outlets were closed down. Despite these events, the second round of voting took place the following day and was won by the incumbent candidate, Ellen Johnson Sirleaf, who subsequently established a government.

Following the elections, a process began to draft a strategic Roadmap for national reconciliation. Having worked in Liberia for more than two years and, given the importance of this undertaking, HD decided to support this reconciliation process which aimed to address some of the issues which were a cause of difference between Liberians, both among the political parties as well as other segments of Liberian society.

HD’s activities during the 2011 Presidential elections in Liberia focused on bilateral discussions with the five main political parties and their Presidential candidates. Following the first round of voting, HD’s informal dialogue process shifted in order to focus on the two parties which were due to contest the run-off election. Discussions started to focus on the need to broker one-to-one talks between the leaders of the two parties and HD was able to bring them together for talks only days after the run-off elections. These leader-to-leader talks quickly broadened to include senior representatives from both parties and discussions covered issues such as inclusive government and a future national dialogue. Ellen Johnson Sirleaf was subsequently inaugurated as the President of Liberia in January 2012 and formed a new government the following month. 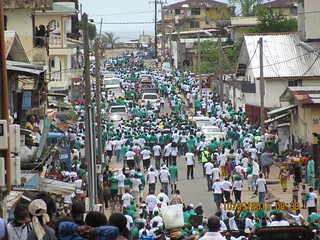 Working with UNMIL, ECOWAS and the NEC, HD consequently contributed to the period of calm which surrounded the initial elections in Liberia in 2011 and to re-establishing peaceful political dialogue after the run-off elections. In carrying out its work in Liberia, HD drew on the strengths of Liberian civil society including the Election Coordination Committee, the Mano River Women’s Peace Network and the Liberian Council of Churches.

However, the tensions which had escalated during the election period had not been fully resolved and after the inauguration and the appointment of the Government, the relevant national institutions subsequently explored how to co-ordinate their activities and build a comprehensive reconciliation plan. In March 2012, the Liberian Government and the United Nations Peacebuilding Commission Steering Committee for Liberia recommended that the principle agencies in the Task Force set up to spearhead the reconciliation process draft a strategic Roadmap to serve as the basis for the Government’s National Healing and Reconciliation strategy.

During discussions with Liberian leaders, political parties, civil society and relevant institutions (such as the Governance Commission), HD assisted Liberian actors to consider the kind of dialogue and reconciliation process they would like to engage in and how important issues might be addressed in the process. The organisation also assisted the United Nations, including UNMIL, in its own contribution to the design and implementation of the national dialogue and reconciliation process. HD participated in a workshop on the Roadmap which was facilitated by the United Nations’ Bureau of Crisis Prevention and Recovery and provided technical input into the draft document. The organisation also shared comparative expertise with, and offered advice to, the principle agencies and the international community on how to support the reconciliation process in Liberia.

A draft of the Strategic Roadmap for National Healing and Reconciliation was released in October 2012 and subsequently considered during a series of stakeholder workshops. These were carried out by the Ministry of Internal Affairs with funding support from the UNDP and UNICEF. The workshops aimed to gather nationwide and bi-partisan support for, and to galvanize political consensus on, the Roadmap and its implementation. Representatives of the Senate, the House Standing Committee on National Reconciliation, Peace, Security and Internal Affairs, the Justice Sector, political parties, and civil society organisations were all consulted. The Roadmap was presented on 12 December 2012 at the formal launch of the Liberia National Vision 2030 framework (a long term national development programme). The process highlighted the need to convene additional technical working sessions to incorporate comments from the stakeholder workshops into a final version of the Roadmap.

HD has continued to closely monitor the situation throughout this period.

HD is grateful to the Swedish International Development Cooperation Agency (SIDA) in Liberia for supporting its work on this project.