Nigeria’s Middle Belt – a region considered the dividing line between the Muslim North and the mainly Christian South – has been wracked by recurrent cycles of conflicts for decades. These have led to the loss of thousands of lives.

Drawing on its successful experience in supporting the Nakuru Peace process in the Rift Valley of Kenya in 2012-2013, HD began work in Nigeria’s Middle Belt in early 2013 in an attempt to address those endemic conflicts and facilitate reconciliation among the communities through inter-communal dialogue processes. HD’s initial engagement in Plateau State later extended to the neighbouring State of Kaduna. Since 2013, HD has successfully led three inclusive inter-communal dialogue processes across the Middle Belt region (Jos, South Plateau, and South Kaduna) which have been instrumental in reducing open hostilities between communities and have led to the signing of landmark declarations in each state: The Declaration of Commitment to Peace in Plateau State, the Kafanchan Peace Declaration in Southern Kaduna, and the Southern Plateau Peace Declaration.

Nigeria has for decades periodic episodes of violence especially in the Central States of the country, known as the ‘Middle Belt’. The region represents the dividing line between the mostly Muslim north and the mainly Christian south. Small and large ethno-religious groups have been coexisting in the Middle Belt which, as a result, has been prompt to ethno-religious tensions. Groups often collide over several issues including land, resources, and political power. Rivalry between the communities has led to the loss of thousands of lives in the last decades.

The description of the specific status of different groups in Nigeria – as outlined in the country’s Constitution – is another source of conflict in the Middle Belt.  This is known as the problem of the indigene versus settler issue which gives ‘rights’ to certain community groups considered indigenous to a state, over other groups considered as settlers from other parts of Nigeria. The exclusive indigene status has largely contributed to endemic strife between the community groups in certain parts of the ‘Middle Belt’, who have been fighting over equal access to land, resources, and political power which in many cases can be the exclusive privilege of the indigenous population of that particular State.

In its engagement in the Middle Belt region, HD’s key objective has been to encourage communities to embrace dialogue as an alternative dispute resolution mechanism, thus leading to peaceful coexistence between them.

Since early 2013, HD has led and facilitated 3 inter-communal dialogue and conflict mediation processes in the Middle Belt region of Nigeria (Jos, Plateau State; Southern Kaduna, Kaduna State, and Southern Plateau State). The dialogues were community-driven, enabling communities to be more directly involved in finding lasting solutions to their issues and concerns, and building trust and confidence. HD’s approach cut across all levels of Civil Society and in its efforts, sought the buy-in and support of key stakeholders including the Federal, State and Local Governments, the business community, traditional rulers, community and religious leaders, women and youth. This ensured inclusivity in the various dialogue processes. The bottom-up approach provided a different model for addressing the issues between the communities and was received positively. Through this approach, HD succeeded in developing an alternate culture of dialogue between the communities in resolving their disputes.

Phase one focused on comprehensive planning and preparation for the dialogue processes. HD carried out bilateral discussions with key stakeholders – including State and Local Governments, traditional rulers, community and religious leaders, the business community, women and youth – to gather their input and views for the structure and composition of the proposed dialogue process and to gain their buy-in and support.

As part of phase two, HD supported the communities in developing position papers on their issues and concerns. Those papers formed the basis of discussion in the dialogue process and were then condensed into a roadmap/agenda for discussion. Outreach meetings were organised at grassroots level with the wider communities to seek their endorsement of the issues and concerns outlined in the position papers produced by their representatives. The outreach meetings encouraged ownership of the process by the communities, as well as ownership of the ideas and strategies for dealing with the issues and concerns. Formal dialogue discussions between the communities then began. They were structured to take place over a period of several months with each dialogue session lasting 4-5 days. The key output in each of the dialogue discussions was a set of agreements and recommendations drafted by the communities themselves for resolving the conflict.

The third and final phase of HD’s dialogue processes is an on-going one; it focuses on the sustainability of the established peace processes. Following the conclusion of the formal dialogue discussions, HD has been supporting the communities in the three regions to develop implementation strategies on the basis of the recommendations stemming from the formal dialogue discussions. HD has similarly set up a Conflict Early Warning Response System – CEWERS (formerly known as the Tension Management Networks) comprising of representatives from the community groups (called Peace Monitors) engaged in the dialogue processes. The Peace Monitors closely observe the security situation and intervene when the need arises. In collaboration with the local and state governments, the security agencies and the communities, the Peace Monitors have also established strategies for addressing security concerns and safeguarding the achievements of the dialogue processes.

HD continues to offer technical support to the communities in ensuring the sustainability of the peace processes and the CEWER system.  The organisation also continues to mobilise the support of the Federal and State governments as well as long-term development and peacebuilding agencies, to support the implementation processes. 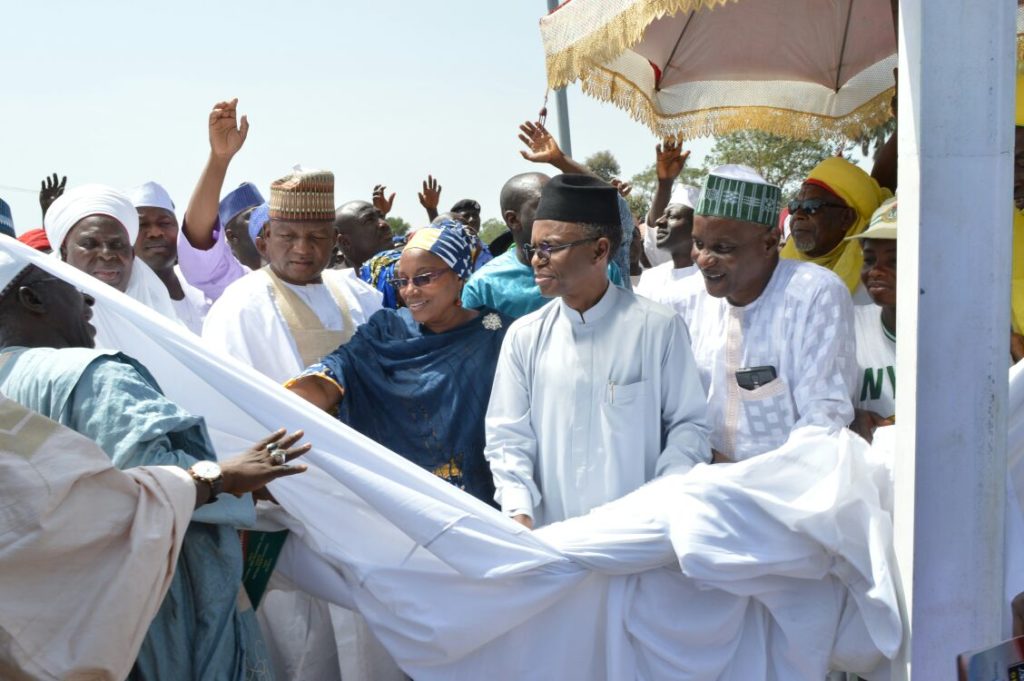 HD has also been engaged in Benue State where heavy fighting has been on-going due to farmer/herder related disputes. The conflict not only affects Benue State, but extends to five other states including Adamawa, Taraba, Zamfara, Plateau and Kaduna States, known to be as the six frontier states. The farmer/herder issue has impacted the country negatively, causing vast destruction in its wake and éading to the loss of numerous lives. HD has provided technical support to the sub-committee established to resolve this endemic problem. HD has and continues to play the mediator role between the affected communities and the State Government. HD aims to continue to lobby for the review of the existing anti-open grazing law(s), which have been attributed to the escalating conflict. HD will similarly aim to mobilize the communities for peaceful coexistence through possible dialogue and consultations with the communities.

The peace agreements signed in Jos, Southern Kaduna and Southern Plateau between eight, twenty-nine and fifty-six communities respectively, have brought together communities, for the first time, to jointly address their longstanding issues.

To date, trust and confidence have improved between the communities as exemplified by the increased number of interactions and reduced number of open hostilities between them.

The processes have helped reduce suspicion among communities, leading to an improved understanding of each other’s concerns and issues and the use of dialogue as an alternative dispute resolution mechanism. Communication channels between the communities and the State Government have opened up as a result of the State and Local Governments’ participation in the dialogue processes. Similarly, the Federal and State Governments have been supportive of the implementation processes of the dialogue recommendations in Jos and Southern Kaduna, committing funding for the implementation of the key recommendations.

Implementation of the dialogue recommendations has begun in the three regions; infrastructures destroyed during the crises in Jos have been rebuilt in Jos; discussions on the resettlement of internally displaced populations and set up of public apology billboards have been undertaken in Southern Kaduna; and traditional rulers have been appointed by the Plateau State Governor in Southern Plateau to build confidence among communities.

The CEWER system set up in all three regions have helped safeguard the relative peace and is continually engaged during periods of tensions, such as election periods.

HD has also helped both Plateau and Kaduna States to set up institutions that will ensure the sustainability of the peace processes: the Plateau Peace Dialogue Forum and the Kafanchan Peace Development Initiative. A Peace Building Agency was set up in Plateau State to oversee peace initiatives in the State. A peace commission will also shortly be set up in Kaduna State to ensure the sustainability of the peace process  and of previous efforts in addressing the endemic conflicts in the state, as well as follow up on the implementation of the Kafanchan Peace Declaration.

The inclusion of women was key to ensuring all-inclusive dialogue processes. HD introduced the concept of women’s participation in the dialogue processes during bilateral discussions with key stakeholders. The organisation then helped women in each region set up Women’s Steering Committees composed of influential women in the peacebuilding arena drawn from the communities participating in the dialogue discussions. The women were nominated by the community leaders. The Women’s Steering Committees were responsible for leading wider discussions with women at the grassroots level and seeking their input on how best to address their issues and concerns. This provided female participants with a forum to share issues which directly affect them during communal clashes. The women drafted practical recommendations for addressing the gender dimensions of violence. In addition, the Women’s Steering Committees developed a “Declaration for peace” in Jos and Southern Kaduna which outlines their commitment to embracing dialogue as an alternative dispute resolution mechanism. HD has further supported the Women’s Steering Committees in reviewing the recommendations stemming from the main dialogue processes, paying attention to how these incorporated women’s issues and concerns. Their ideas and feedback were subsequently incorporated in the drafting process of the main agreements between the communities. In addition, women representatives from the steering communities have been nominated as peace monitors to help safeguard their peace.

Support to national and local elections processes in Nigeria

During Nigeria’s Presidential and Gubernatorial (State level) elections, conducted on the 28 March 2015 and 11 April 2015 respectively, HD in collaboration with other peacebuilding organisations, worked towards the establishment of a high-level dispute resolution mechanism designed to deal with any crisis that might emerge during, or in the aftermath, of the general elections. HD’s work was geared towards supporting mediation efforts undertaken by the National Peace Committee (set up to ensure free elections) in the event of large-scale violence. With HD’s support, the National Peace Committee conducted valuable preventive work in the lead-up to, during, and after the elections, to ensure that they proceeded peacefully and smoothly.

Following the successful conclusion of its support to the general elections, HD carried out an extensive assessment study to i) provide an in-depth account of the types of formal and informal mechanisms set up at the state and national levels to help prevent and deal with disputes and violent conflict, especially in relation to the 2015 elections; ii) enhance understanding of the factors that inform the establishment and management of alternative dispute resolution (ADR) mechanisms in Nigeria; iii) undertake an evaluation of the strengths and weaknesses, as well as  the advantages and disadvantages of Nigeria’s different ADR models; and iv) identify opportunities and scope for the use of conflict resolution mechanisms to address some of the systemic and recurrent causes of dispute in Nigeria.

HD wishes to convey its sincere thanks to the Governments of Canada and Germany for their support to the dialogue processes, as well as to the United Kingdom Department for International Development (DFID), the Norwegian Government, and the Australian Government, for their support to its on-going work in Nigeria, particularly in the Middle Belt dialogue processes and Election support work.