Since its independence in 1960, the Central African Republic (CAR) has been prey to chronic instability. The severe crisis that broke out in 2012 threatened to provoke the dissolution of the country, with a million lives lost and a million more displaced. Despite national and international efforts, the state has struggled to extend its authority beyond the capital of Bangui while armed groups continue to control a majority of the country’s territory. This is the context in which HD is providing support to stabilise the country.

In 2012, the Central African Republic (CAR) was shaken by the worst crisis of its recent history, though one of many in a string of crises since its independence in 1960. The outbreak of violence, initially political in nature, was instrumentalised by armed groups and government forces, quickly taking a religious turn as Christians aligned themselves with Anti-Balaka forces, facing off against Muslims associated with the ex-Seleka. The successive coup d’états of 2013 and the massacres that followed led to an intervention by an international military presence, initially through the auspices of the African Union (AU), with the support of France, and in turn by the United Nations (UN). These operations would enable the establishment of transitional governance institutions in January 2014.

The transitional period from 2014 to 2016 allowed for a degree of calm, the establishment of an inclusive peace process and for national elections to be held in February 2016. The elections were considered to have been transparent and conducted in a peaceful manner. Nevertheless, the transition did little to resolve underlying structural problems. The fragility of the state apparatus, which continues to struggle to impose its authority outside of the capital of Bangui; a lack of adequate infrastructure; rampant corruption and poverty; and porous borders, continue to threaten the stability of CAR. 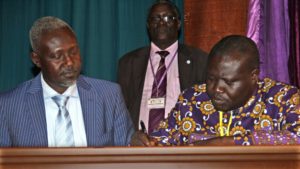 President Faustin-Archange Touadéra delivered a speech to the nation during his inauguration on 30 March 2016, instituting his key priorities and principles: the establishment of security, justice, and a reconciliation process.

His government would go on to sign the Agreement for Peace and Reconciliation in the Central African Republic (APPR-RCA) with 14 armed groups on 6 February 2019. Under this accord, the armed groups agreed to a cessation of hostilities in exchange for the inclusion of representatives in the institutions of the republic. The parties further reached an agreement on the parameters of a judicial and reconciliation process, the establishment of mixed security units and the participation of irregular combatants in a process of demobilisation and reintegration. Nevertheless, as different parties to the conflict continue to fragment, the implementation of the APPR-RCA requires an ongoing mechanism for dialogue to adapt to new developments.

HD has been present in CAR since 2007, contributing to national peace and reconciliation processes through dialogue and mediation. The organisation was one of the first to contribute to the establishment of the politically inclusive dialogue of 2008 and to the Bangui National Forum in 2015, which led to the adoption of the Republican Pact for Peace, National Reconciliation and Reconstruction and the opening of inroads towards the principles of the Landmark Agreement on Disarmament, Demobilization, Reintegration and Repatriation (DDRR).

HD further assisted in the organisation of the general elections of 2015-2016. Since the elections, HD has provided its expertise in establishing a political dialogue between the Central African government and the 14 armed groups which challenged its authority. The APPR-RCA was adopted as part of this process, a result of HD’s mediation support to the African Union.

The key objectives of the organisation have since been to:

In support of the implementation of the APPR-CAR, and following the enactment of the law by the Head of State on the 7th of April 2020 which created the Truth, Justice, Reparation and Reconciliation Commission (TJRRC) as prescribed by the Republican Pact, five radio episodes addressing the pillars of transitional justice were produced by HD, in partnership with the Minister for Humanitarian Action and National Reconciliation. Representatives of the State, armed groups, and civil society were consequently able to share their vision for reconciliation in Central Africa with the population. The radio shows were produced in alignment with the 5th National Day of Victims of Military-Political crisis in the CAR on 11 May 2020.

HD would like to express its gratitude to the European Union and the United Kingdom for their support since 2014 and 2019, respectively.