The Central African Republic (CAR) has experienced persistent political-military crises for many years. More recently, the humanitarian situation deteriorated following armed rebellions and the activities of criminal gangs in the north of the country, displacing approximately 300,000 people and leaving parts of the country deserted. In 2007, President Francois Bozizé promoted an All-Inclusive Political Dialogue (AIPD) process to reconcile the many political and armed entities throughout the country, and signed peace pacts with two rebel groups. Following an assessment in July 2007, and the outcome of a ‘Réunion de Concertation’ chaired by HD in August 2007 in Bangui, the President requested HD ‘s help in organising the AIPD process and in tackling political, economic and social conditions in the country as a whole.

The Central African Republic (CAR) is a fragile state with a struggling infrastructure, where basic services are virtually non-existent outside the capital. The humanitarian situation has deteriorated following armed rebellions and the activities of criminal gangs in the north of the country that have displaced approximately 300,000 people and left parts of the country deserted. In 2003 President Francois Bozizé seized power and he was elected in 2005.

In 2007, President Bozizé promoted an All-Inclusive Political Dialogue (AIPD) process to reconcile the many political and armed entities throughout the country, and signed peace pacts with two rebel groups. Following an assessment in July 2007, and the outcome of a meeting (‘Réunion de Concertation’) chaired by HD in Bangui the following month, the President requested HD ‘s help in organising the AIPD process and in tackling political, economic and social conditions in the country as a whole.

Regional politics and lack of security in neighbouring countries have exacerbated the country’s instability. Threats of violence spilling over from conflicts in Chad, Sudan and the Democratic Republic of Congo, small arms proliferation and fighters moving between conflict zones further increase the country’s vulnerability.

HD’s objective as organiser and supporter of the AIPD process was to encourage and assist the inclusion of representatives of different armed groups and mainstream political opposition into a national political process. These efforts were conducted in collaboration with the United Nations Peace-building Office in the Central African Republic (BONUCA) and the Organisation internationale de la Francophonie (OIF).

HD chaired a meeting of interested groups, including leaders of political parties and representatives of political military groups, in the capital Bangui, on 23-25 August 2007. The meeting represented the launch of the first phase of the AIPD and following which President Bozizé asked for HD ‘s help in organising and facilitating the process. The HD Centre was nominated as President of the Preparatory Committee (PrepCom) and opened a liaison office in Bangui in September 2007.

The Preparatory Committee (PrepCom) created by Presidential Decree was set up on 18 December 2007 and brought together the presidential majority, the democratic opposition, civil society as well as the three rebels groups, l’Armée Populaire pour la Restauration de la République et de la Démocratie’ (APRD), the FDPC and the Union des Forces Démocratiques pour le Rassemblement (UFDR). One of its major achievements has been to convince the APRD to participate in the process, opening the door to a possible ceasefire and peace agreement.

The PrepCom ended its mission on 31 March 2008, as planned and a final document was officially presented to President Bozizé. 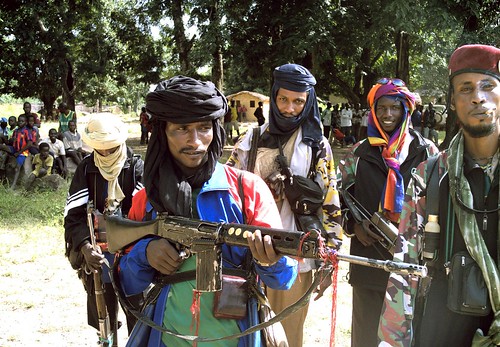 Following a PrepCom mission led by HD to Libreville in Gabon a peace agreement was signed between the Government of CAR and the APRD, under the auspices of Gabonese President, Omar Bongo, on 9 May 2008. On 21 June 2008, a global peace agreement was signed in Libreville between the Government of CAR, the APRD and the UFDR. The document stipulated that a general amnesty would be granted to the rebels allowing them to participate in the inclusive political dialogue in Bangui.

HD maintained its liaison office in Bangui until June 2008, in support of the process, and facilitated a series of consultations with regional actors to ensure their support for the inclusive political dialogue.

With legal and security guarantees for all participants in place, the All-Inclusive Political Dialogue went ahead in Bangui in December 2008 with all actors of the CAR crisis present.

The main outcomes included the reaffirming by all parties of their commitment to respect the Libreville global peace agreement and the forming of a government to include all the main political entities involved in the dialogue.

HD remained available throughout the whole process briefing and advising all parties on request. Following an official request from the Organisation Committee of the AIPD in November 2008, HD also sent a representative to facilitate the dialogue during three weeks in December 2008, along with the UN, the OIF and the African Union (AU).